Bronagh Murphy has been through a lot over the past few years, a hell of a lot, so when her 21st birthday rolls around all she wants to do is relax and spend the day with her family. Quietly.

Her boyfriend, Dominic Slater, doesn’t do relaxed or quiet. He never has, and he never will. He plans out a day for Bronagh that is both romantic, and exciting. However, Dominic’s version of exciting is very different to Bronagh’s as she will soon find out.

When things take a turn for the worst, and a bad altercation leaves Dominic once again fighting for his girl, Bronagh will have to decide once and for all if she will fight in Dominic’s corner or walk away and never look back.

I absolutely loved this book! LA Casey does such an amazing job with making the characters seem so life like and she has you falling in love with them all every time. She has become one of my favorite authors, and one I’m constantly see what she has coming up next!

I think I just fell head over heads in love with Dominic in this book! ::SIGH:: He’s melt your panties hot, and so romantic, it’s heart breaking that he’s already taken ; )

In this story it is Bronagh’s 21st birthday and you are taken on an adventure as Dominic tries to make her birthday extra special. The things he does for her are so sweet, you’ll have tears in your eyes. I think my favorite part is about 25% into the book though, you’ll just have to read the story to find out why! Seriously though, you need to read it! Parts will have you tearing up, and others will have you laughing out loud!

I loved Dominic and I loved this book as well. I can’t see what L.A. Casey has in store for us in Alec! I’m interested to see what happens to this horn dog in his story. I’m sure L.A. Casey won’t disappoint!

L.A. Casey was born, raised and currently resides in Dublin, Ireland. She is a twenty two year old stay at home mother to an almost two year old German Shepherd named Storm and of course, her four and half year old (the half is apparently vital) beautiful little hellion/angel depending on the hour of the day.

Her first novel, Dominic, was released on March 17th, 2014, and on March 21st, 2014, it became an international Amazon bestseller.

Title: Among the Echoes

My name was Dr. Erica Hill. I was a victim, then a witness, and then I ceased to exist altogether.

I may still be breathing, but stripped of my identity, I have long since stopped living. I am invisible, and my life depends on my ability to stay in the shadows.

But he sees me.

Slate Andrews is the embodiment of everything I have been taught to avoid. He’s rich and famous, and one image of him with a woman would earn millions for any paparazzi lucky enough to snap it. He has vowed to protect me with his life, yet he exposes me with his every breath. I should be stronger and walk away. I should disappear. But I’m terrified he would come after me.

I’m on the run, determined not to take him down with me but absolutely unable to let him go.

My name is Riley Peterson…at least for today.

*Among The Echoes is a stand alone novel which contains material that may be offensive to some readers. Including sexual abuse, graphic language, and adult situations. Intended for readers 18+.* 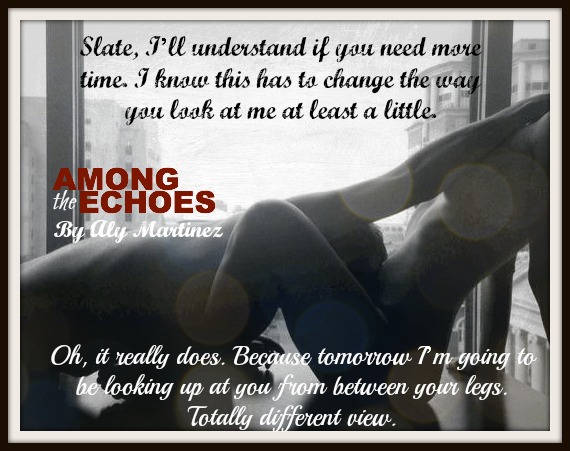 After reading the synopsis, I couldn’t wait to read this book, but wasn’t sure what to expect. After reading this book I totally fell in love with the characters and the story. Simply Amazing!

The beginning of the book is very dark and definitely not for the light hearted. After Erica is brutally raped by 8 men, she is saved by Leo, an undercover cop that she seem to feel the safest with. Even though he stood guard while all this happened.

Fast forward 3 years and Erica (aka Riley) and Leo (aka David) are still on the run from the past. Erica is only a fragment of the woman she used to be and she hates it. She jumps at a knock on the door and she can’t ever be alone. She is always depending on Leo to keep her safe and always be with her. One day though while trying to get into their new place, she runs into a mouthwatering mountain of a man that scares her to death. She doesn’t care that he’s the hottest man she’s ever seen, she’s too afraid to see he as anything other than a threat to their safety.

Slate Anderson is a very successful boxer who is at the top of his game. However, he isn’t interested in all the limelight and the fame. He would rather finish a fight and then be left alone until it’s time to start training again. But when he goes to his getaway place, he runs into a jumpy average looking woman who for some reason does anything she can to get away from him.

Little did either of them know that what happens later that night only brings them closer than either ever expected to be. Slate states to see glimpses of the woman Erica is under all of the fear, but he just has to try to make her see that she is stronger than she thinks she is. Once Slate is able to break down some of Erica’s walls the pages are on FIRE!

Throughout the story your heart just breaks for Erica, she’s gone through so much and hasn’t ever really had a chance to escape the demons that are constantly chasing her. When she finds Slate, he somehow is able to make her feel like the strong woman desperately wants to be, not just the victim she feels that she is, and she is deeply grateful for everything he does for her. But Erica’s past is still hunting her down and she constantly has to be on alert. Slate is constantly reassuring Erica that he will keep her safe, he will make everything right for her, but will he be enough to free her from her past?

Will the people hunting down Erica finally catch up to her and accomplish their goal in killing her? Will Erica ever get the chance to fully give everything thing she is to Slate, the good and the bad?

I absolutely LOVED this book and I can’t wait to see what Aly Martinez comes up with next! Slate has battled his way to my top 5 book boyfriend list, so you know that this is one bad boy you don’t want to miss out on 😉

Born and raised in Savannah, Georgia, Aly Martinez is a stay-at-home mom to four crazy kids under the age of five, including a set of twins. Currently living in Chicago, she passes what little free time she has reading anything and everything she can get her hands on, preferably with a glass of wine at her side.

After some encouragement from her friends, Aly decided to add “Author” to her ever-growing list of job titles. So grab a glass of Chardonnay, or a bottle if you’re hanging out with Aly, and join her aboard the crazy train she calls life.

I won’t be caught off
guard again. I won’t let them win. They played the first round and won.
Now it’s time for me to even the score. Damon and Leona will pay for
their twisted games. Leona is first.His touch repulses me.
His fake affection disgusts me.
He sickens me.

I
need to get my head in the game. I need to be smart and break their
bond to more easily crush them. Damon is clever. He knows what he’s
doing. He’s been playing the game long enough.

Add to Goodreads
Book One in the series is OUT NOW!!
Corrupted Book One 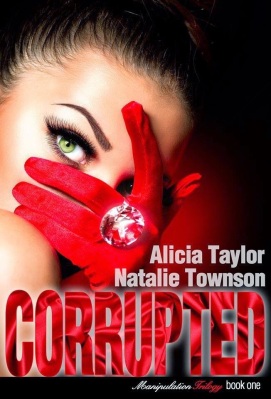 I am going to marry a monster.
He is my everything.
He manipulates people for fun.
He takes over their lives, consuming them. He dominates and crushes, ruling them, claiming their souls.
No one has survived the games of Damon Hunt, so far.Before now. Before me.

I am Ella Knight. I am corrupted.
My sister was a victim of Damon’s games.
It’s my turn to play now.
Damon Hunt has been my sole focus, my everything for three years, since my sister’s death.
I’ll
manipulate him. I’ll take over his life, consuming and crushing him. I
am going to take away his soul. Damon Hunt will not survive my games.

Alicia
Taylor is 28, lives in Derbyshire in the UK with her husband and two
step-daughters.
Warped is her second novel which she cowrites with Natalie Townson. This is book two in
the Manipulation Trilogy.
Her
love of reading led to blogging which led to this – dipping her toes in the
indie author pool.

Natalie
Townson is 33, a mother of one beautiful little boy and lives in Gloucester in
the UK with her Husband.
Warped is her second novel that is a book two of the manipulation trilogy, that she co
writes with Alicia Taylor.

I have a craving.

A dark urge that I’ve failed to resist despite years of trying to do that very thing.

I’ve forced myself to hide behind a mask, a perfect orchestration to hide my true self.

After I met her, my wants and needs, my inner most desires changed.

She encouraged me to embrace who I truly am, and she was willing to do anything and everything I wanted, giving herself to satisfy my most carnal appetite.

Then everything in my carefully managed world came crashing down around me. A moment in time, a loss of control, and the very thing I cherish was nearly taken from me.

My fate now lies in her hands.

The very life I’ve built for myself … everything I’ve ever done now waits in purgatory, all caused by a lack of focus at a time when my most concentrated attention was needed.

The very thing I crave may now be the very end of me.

BJ Harvey is the Amazon Bestselling Author of The Bliss Romantic Comedy Series and The Lost Romantic Suspense Series. An avid music fan, you will always find her with headphones when writing, and the speakers blaring the rest of the time. She’s a wife, a mom to two beautiful children, and a full-time university student. BJ resides with her family in what she considers the best country in the world—New Zealand.

Don’t forget to check out B.J.’s BLISS and LOST series!