We’re celebrating the release of BOUND BY SPELLS by Stormy Smith! Check out the excerpt, teasers and giveaway below! 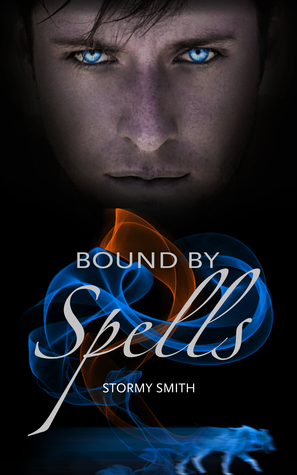 Aidan Montgomery hadn’t been prepared for Amelia Bradbury to walk in and then out of his life. He also hadn’t expected to find the powerful magic hidden deep within him for the last nineteen years, but he’s embracing it — finding more control and more answers every day. Now, with the help of Amelia’s best friend, Bethany, Aidan is on a quest to understand his destiny and find Amelia.

Amelia decided to stand by her duty, which meant walking away from her first chance at love. Trapped in Cresthaven at the Queen’s mercy, she spends her days with Micah — an ally she still holds at arm’s length — struggling to manage her heartbreak while keeping her mind focused on the task at hand. As she continues to unlock the secrets of the Keeper power, Queen Julia’s true motives reveal themselves, forcing Amelia to decide, yet again, how much she’s willing to sacrifice.

Will Aidan get to Amelia before it’s too late, or will the very power that sustains them keep them apart?

“Featuring a cast of mages and shapeshifters with unique magical abilities, one destiny-shaping prophecy, a genocidal megalomaniac, and a budding, heated romance (or two!), this book is paranormal gold! Read the first book in the series first, of course, but once you finish this one you’re sure to be salivating for the next release in this not-to-be-missed romantic paranormal series.” ~Serena Chase, USA Today’s Happy Ever After blog, author of The Ryn

As I stopped in front of him, I wasn’t sure what to do. I was suddenly nervous and unable to make eye contact anymore. I fidgeted and a shyness I hadn’t felt since his initial pursuit took over. As I waged an internal war over what to do, Aidan did what he did best and took control of the decision for me. He had always known what I needed before I did. He got up and circled me. He stopped when he was facing me and sat down. Even sitting, his head was close to chest level. His tail swished back and forth behind him and his eyes were full of patience. He let out a low yelp and it was all the encouragement I needed to drop to the ground and wrap my arms around him. My body was positioned between his front paws and he nuzzled into my hair as I struggled to maintain control of my raging emotions and held on to him as if he was my life raft in the sea of uncertainty and fear I lived in now. (Amelia)

SEE STORMY AND HER FANS SHAKE IT OFF IN THIS FUN VIDEO!

Stormy Smith calls Iowa’s capital home now, but was raised in a tiny town in the Southeast corner of the state. She grew to love books honestly, having a mom that read voraciously and instilled that same love in her. She knew quickly that stories of fantasy were her favorite, and even as an adult gravitates toward paranormal stories in any form.

Writing a book had never been an aspiration, but suddenly the story was there and couldn’t be stopped. When she isn’t working on, or thinking about, her books, Stormy’s favorite places include bar patios, live music shows, her yoga mat or anywhere she can relax with her husband or girlfriends.

The King Always Gets His Way.
Women, business, pleasure: When I want it, I get it.
I’m never denied.
Including her.
I will break her.
I will show her who the king of this city really is.
The Feisty Princess of Manhattan will learn I am not a man that can be tempted.
No matter how fucking bad I want her in my bed.