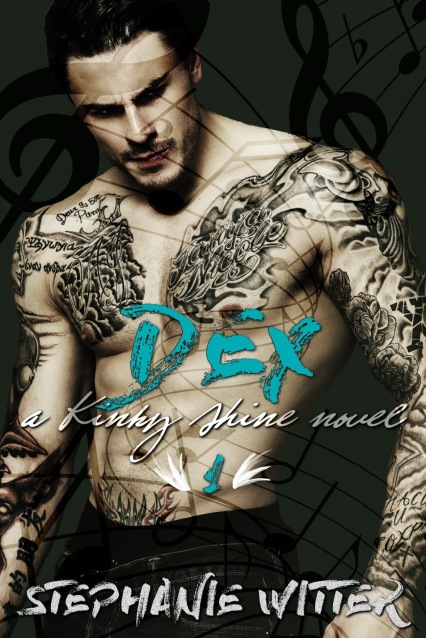 She succeeded in making him feel like a man. A normal functioning man when he hadn’t felt that way in years.

When my father, manager of the worldwide phenomenon Kinky Shine, asked me to come and help the band members appear more approachable I never thought my first meeting with Dex Bowers would start with such a question.

Immediately, I wanted to strangle him, wipe the smirk off his face and force him to mutter more than three words.

But there’s something mysterious about him that was electrifying and the more he pushed me away and angered me, the more I wanted to know him and push through his hangups.

“Trust. That f*cking trust thing didn’t come easily to me.”

In the five years since my band became famous, not once had I been photographed with a woman. I knew it fed the supposed mystery surrounding me, but the real truth was far more humiliating than I was comfortable with.

That was until Harley Floyd walked in and I was left with a mind numbing lust for her that scared me shitless. It should be easy to let go and trust her just enough to have fun, to be happy I could finally come up with new material for our next album. But nothing was easy and with a life made of sex, drugs, and rock n’ roll I wasn’t sure if anything could last. Not even my band.

“What twenty-five year old was f*cking lost when his cock was rock hard when close to a gorgeous woman? One answer to that; a man who hadn’t had sex in a really long time.” 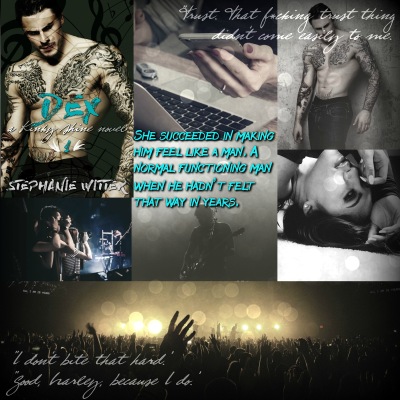 “Harley…’’ There was a fucking warning in her name, but she didn’t budge, didn’t bat an eye. But she did stop breathing for a second and her green eyes darkened again. My whole body shivered at her reaction. I inhaled and I didn’t smell the traffic exhaustion or other smells associated with LA. No, what I smelt was her vanilla perfume.

I pressed harder in the wall, the concrete biting into my back. I clenched my fists and kept my eyes locked with hers. I traced my lower lip with my tongue and her eyes went down to my mouth. My heart tripled in beat and a low growl escaped me. It couldn’t be heard with the bustling noise of the city, but it shocked me. I couldn’t remember the last time I had such a reaction.

When I thought she’d take a step toward me, she took one backward and away from me. Her eyes widened and she blushed. “I guess this time I should be the one leaving,’’ she said in a small voice, her words stumbling into each other’s .

I grabbed her shoulders and crowded her space before I realized what I was doing. Her scent enveloped me, enticed me. The thin material of her top was soft under my fingers, almost like nothing was separating me from her body. If I took a half step toward her I would feel her perfect breasts against my chest. I clenched my jaw and tried to calm my labored breathing. After a few seconds without moving she tilted her head upward to look at me and I was fucked. I thought I had been before that, but now, now I was lost to the sensations she was awakening in me, sensations I thought were gone.

Her lips, lush and parted called out to me. Her cheeks coloring more and more into a deeper red had me ready to damn myself for this show of innocence. Her eyes, bright and yet getting glassier showed nothing akin to innocence and that made me ready to come in my fucking pants. She was a contradiction and I would have never thought it’d be so tantalizing.

“What are you doing?’’ she whispered and her breath brushed my neck. I closed my eyes, my lips parted on a low moan. Fuck. What was she doing to me?

I kept my eyes closed to better feel the brush of her breathing on my skin. My cock was pushing against my zipper and it was fucking painful. I wanted to squeeze myself and jerk off to find a release, but I couldn’t. We were on a street in broad daylight.

I waited and waited and nothing happened. She kept on breathing irregularly and didn’t push me away.

So I did the only thing I could; I opened my eyes. 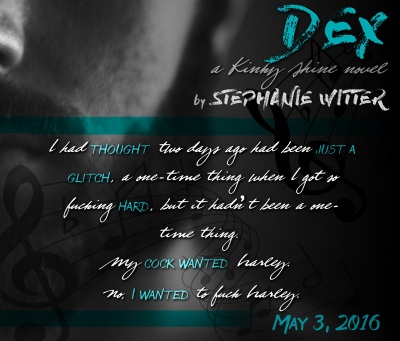 Loved Dex and Harley!!!! Dex is the lead singer of the group, Kinky Shine. Harley, is a blogger who is hired by her father, who happens to be the band’s manager, to help them connect with fans through social media. If you think this develops into a romance that is similar to other rockstar romances, you would be very wrong! You will remember this book and the characters long after you’ve finished the last page.

I loved both characters. Although, it took some time for me to love Dex like I did Harley. When I met him for the first time, I thought he was a complete jerk, but it didn’t take long for Harley to take him down a notch or two. As I read more, I found myself falling for Dex. The two are so stubborn, but it adds to their banter and attraction to one another. The chemistry between the two is sizzling, and Witter is a master at building it until you and the characters are about to combust.

While Dex was a great romance, there was so much more going on….secrets, hidden problems, among other things. I liked how Witter developed Dex and Harley to be such complex characters who have multiple layers to them. Harley’s an independent woman who has worked hard to find her place in the music industry without relying on her father. She doesn’t automatically fall in love with Dex…in fact, she doesn’t like him very much at all when she first meets him. Dex isn’t your typical rockstar. He has secrets, and the person whom the media and fans see is NOT the person he really is at all. Witter also does a great job of developing the personalities of other band members without taking away anything from Dex and Harley. I find myself very anxious for the stories of the other band members, especially Maxen. I think he has a lot going on underneath that sex god image he shows everyone. Great start to a new series. Looking forward to more!

Stephanie Witter is a dreamer. She started

learning English at three, and fell in love with the language. Always with a

book or two close by, she can’t spend a day without reading (or writing).