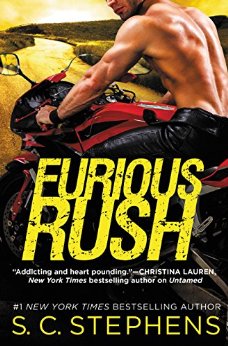 Mackenzie Cox has a lot to prove. Daughter of a racing legend, she is eager to show the world that she has inherited her father’s talent in the male-dominated sport of professional motorcycle racing. The last thing Kenzie needs is to be antagonized by her rival team’s newest rider, Hayden Hayes. Plucked from the world of illegal street racing, Hayden immediately gets under Kenzie’s skin. His insinuations that Kenzie is a spoiled princess who was handed her career fuels her desire to win, and much to her surprise, Kenzie soon learns she performs better when she’s racing against Hayden.

As Kenzie and Hayden push each other on the track, the electric energy between them off the track shifts into an intense–and strictly forbidden–attraction. The only rule between their two ultra-competitive teams is zero contact. Kenzie always does her best to play by the rules, but when her team slips into a financial crisis, she has no choice but to turn to Hayden for help. The tension simmers during their secret, late-night rendezvous, but Kenzie has too much to lose to give in to her desires. Especially when she begins to doubt that Hayden has completely left his street life behind…

Fantastic, fast-paced romance! MacKenzie is the daughter of a racing legend. But, the glory days of Cox Racing is in the past. Kenzie’s father’s dream is in danger of imploding due to financial hardship. She not only has to prove herself on the racetrack in a male-dominated sport, but if she wins the season, her father may stand a chance of saving his business.

Hayden is a street racer who has been hired by Kenzie’s father’s rival, and the two will face a fierce battle on the racetrack. The two should be enemies, and they are at first, but they can’t deny the attraction or the fact that each of them perform better when they are racing each other. The problem is they are forbidden to have contact with each other or be fired. How long can they deny their attraction to one another? Will they risk it all for love?

Furious Rush is different from some of the writer’s other novels, but it’s just as good. The chemistry between Kenzie and Hayden is crazy hot! When they are around each other, they are furious with other, or they get a rush that leaves their hearts pounding. Neither character isn’t what the other one thinks they are. Hayden makes unfair judgements about Kenzie being a princess and given opportunities created by her father. Hayden isn’t the arrogant street racer that she thinks he is. They each push the other to the limits which makes them better at their sport. I love when the two of them are together everyone and everything else ceases to exist. Each character is also far from perfect. There were things I really liked about them, and there were things that frustrated me, especially their stubbornness. Those faults are exactly what connected me with them. Kenzie is a heroine I won’t forget. She is tenacious, strong, and doesn’t ever give up. I just wish her father saw that. I really hated the way he treated her. I’m hoping he will realize his mistakes before it’s too late.

The book is a romance, but romance isn’t what the entire book is about. There is some mystery sprinkled within the pages that just adds to the excitement…and the race scenes…what an adrenaline rush! I could seriously see myself right there with Kenzie and Hayden. I also liked the forbidden romance between the two. It had shades of Romeo and Juliet, minus the deaths. While it didn’t end on a cliffhanger, there are questions that haven’t been answered yet. With the addition of a surprise character at the end, I definitely will be awaiting the next book in the series.

Kenzie is one of those follow by the rules and never step out of line kind of woman. She’s the daughter to a legend and she’s got to make sure that she’s on point and can’t have anything that could take away her dreams of following in her dad’s footsteps. That’s all well in good, until she receives a late night call from her best friend to bail her out. Kenzie thought she was going to be able to help her friend and then leave, and everything will be back to normal. What she failed to realize, is that her entire life is about to change. One look from a smoking hot stranger is going to turn her entire world upside down.

From the very first page, you get to see into the life of Mackenzie Cox (aka Kenzie, or sweetheart or princess as Hayden likes to call her) She’s the daughter to a legend, but life isn’t as cherry as you may think. Her dad is putting a lot of pressure on her to make she succeeds. The life of Cox Racing is riding on her shoulders. So she does her best and practices as hard as she can, but she just can’t seem to get to where her dad wants her to be. That is until the sexy stranger she saw at the illegal bike night shows up on the rivals team. He may be one of the sexiest men she’s ever seen, but that doesn’t change the fact that he’s a Benneti and he’s over confident. The strangest thing is though, is that she seems to ride at her best when she’s racing him. They have some crazy connection, one that Kenzie doesn’t even want to begin to look into.

However, things change when fine after fine and troubles start to pile up for Cox Racing. Kenzie is willing to break the rules to do anything she can to save her dad’s business. Even if it includes late night practices with the enemy.

Fight it as she might, Kenzie can’t deny the amazing connection she and Hayden have. The more time she spends with him, the more she falls harder and harder. As much as she love for things to be easy, they never are. There are rumors spreading around about Hayden that cause doubt in her mind.

These two have one hell of a bumpy road a head of them. Will they Hayden be able to prove to Kenzie, that he’s not what everyone wants her to believe? Kenzie also has to make a choice. Does she take that path that’s been given to her since she was a little girl, or does she take the path that would give her more love then she could ever dream of?

I seriously loved this book from start to finish. I really want to read more of Kenzie and Hayden! What I really want to know is will Kenzie get to enjoy her two loves in life? THIS I HAVE TO KNOW! I can’t wait to see what else Stephens has in store for us in this series!