Persephone Fields is just an average girl: beloved daughter and loyal friend. One night decides her Fate, when the prince of The Underworld becomes her savior and her kidnapper.

Hades has lived centuries in darkness and sin. When he decides to save the blonde goddess, he doesn’t consider the ramifications of his decision to bring her into his realm.

Two worlds divided struggle to find friendship in a history of family discord beyond their control. When attraction blurs the line, questions result in choices of love or loyalty.

A modern twist of the classic myth: Hades and Persephone, this version incorporates the sensual tension of opposites divided by contemporary humanity and mythical underworlds. Also reminiscent of Romeo and Juliet, this is a love story ripe with desire. 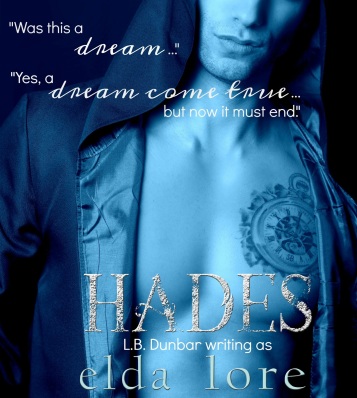 Looking for something different and out of this world? You’ve got to read this one from Elda Lore! It’s a twist on the classic myth of Hades and Persephone!

Persephone is a normal girl enjoying a midnight swim with her two closest friends when she feels someone watching her from across the lake. She isn’t sure if it’s her mind playing tricks on her because her mother has always warned her about the danger of the woods across the lake. She soon realizes it’s not just in her mind when she sees a figure come out from the edge of the woods. Instead of being frightened, she’s drawn to him. As she gets out of the water to join her friends, he disappears. Again, she wonders if what she saw was real, but she will learn soon enough it isn’t fantasy and exactly who he is, and her life will never be the same.

I can’t say enough how much I enjoyed this book! I loved the characters. Persephone is the epitome of innocence, but she’s tough. She managed to survive and stay in a dark, desolate place filled with sadness and despair, and she saw past the darkness in Hades and saw “him.” Who wouldn’t fall in love with Hades? Yes, I know exactly who he is, but he’s more. He’s dark and dangerous, yet there is something that drew me to him. His love for Persephone just melted my heart….you, yourself…will witness exactly how very much he does love her.

The setting and Lore’s writing were so descriptive in details that I was there with Persephone. I felt everything and saw clearly everything she did. It was truly a magical and sometimes very scary place. I love reading a book that completely captivates me and draws me in, and Hades did exactly that. There is so much more I could write about, but I don’t want to ruin a thing for readers. It’s too good to do that!

Elda Lore is actually a pen name of contemporary romance writer, LB Dunbar. This is her first time writing paranormal/fantasy, and she has done a fantastic job! If you have read some of her other works, The Legendary Rock Star Series and Her Paradise stories, you already know how she takes a classic and makes it her own, and she has done the same with this one. I will never look at the love story of Hades and Persephone in the same way. She has taken it and again made it her own! This isn’t just a romance sprinkled with fantasy and paranormal elements, it’s much deeper. It’s magical! Her worlds and her characters come to life and really leap off the pages! I’m so glad she decided to write this series, and I can’t wait to read the next one in the series! I have a feeling this isn’t the end of the road for Hades and Persephone. LOVED it!!!!

Elda Lore is the alter ego of L.B. Dunbar. A writer of mythical tales in the modern world.