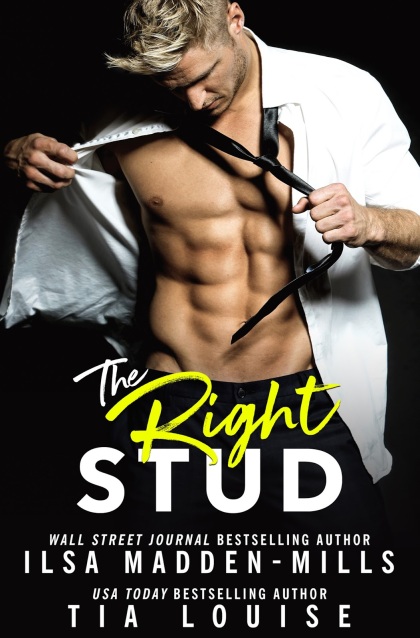 Blurb
Wall Street Journal bestselling author Ilsa Madden-Mills and USA Today bestselling author Tia Louise are back with an all-new romantic comedy filled with Southern sass and steamy scenes that will have you laughing out loud and fanning yourself. Pour the sweet tea and get ready…

As soon as Mr. Tall, Blond, and Handsome walks into that bar, I know he’s the hook-up I need to get over stupid Cheater Kyle.

A few stolen kisses in a dark hallway, and I’m pretty sure we’re headed for a home run—until he disappears without a trace.

Whatever. Men are all snakes in the grass, and I don’t need a new one anyway.

I resolve to forget about his perfect lips (and chest of steel) and instead focus on turning my Granny’s old beach house into a profitable B&B.

What I don’t expect is for him to show up the next day in my kitchen!

You see, my sexy mystery man is none other than Jax Roland, the drop-dead gorgeous home improvement star of The Right Stud, and he’s got an offer I can’t refuse.

With a suitcase in one hand and a hammer in the other, he wants to move in and renovate my old house while he films his new show.

But my roommate has secrets, and they threaten to rip our blossoming friendship—and possible love—apart.

When push comes to shove, is Jax really The Right Stud or is he just another nail in the coffin of love?

Great friends, former English teachers, and southern gals in real life, they’ve teamed up to bring you laugh-out-loud naughty romances with strong leading ladies and sexy alpha males who know how to please their women—and who sometimes you just want to slap.

Today we have the blog tour of 13 by Rhonda James! We are so excited to share this sexy new romance with you! Check it out and grab your copy today!

“Fake it till you make it.”

A notion I once considered utterly ridiculous. Until one crazy night with a mysterious man resulted in a social media frenzy that had the entire entertainment industry talking.

Seems a fake marriage was just what my career needed to make Hollywood come knocking.

Convincing him to continue the charade was almost too easy. The chemistry between us made it impossible to keep my hands to myself. But it was all just pretend, right? Love was never in the script.

That is, until he re-wrote it.

13 Reasons You Should Stay:

The first thing I noticed were his eyes. Bottle green with the tiniest flecks of copper scattered throughout, and when the light hit them just right, those flecks sparkled in the most intriguing way. His shaggy caramel-blond hair stuck up in all directions, as if he’d been running his fingers through it all day, and the longer I stared, the more I found myself wanting to do the same thing. Tattoos circled both of his wrists, and his ears were pierced and adorned in black onyx. He had a smile that could simultaneously melt your heart and panties. Everything about him screamed male model, and if he wasn’t, then he sure as hell should be. He was that gorgeous. The bar was packed, and he was seated close. So close his muscular thigh pressed tightly against mine, making it impossible to ignore his presence. Not that I wanted to or anything.

By the time I finished examining him, I looked up and found his pouty lips were puckered as if he was deep in thought. Either that or he was thinking about kissing me. Yeah, I knew we hadn’t been formally introduced, but I’d definitely consider kissing those lips. His gaze was intense, and it roamed my entire body, slowly, as if he were cataloging every detail for later when he was alone and naked in the shower. The thought of him naked, alone or otherwise, excited me.

“No one special.” I fidgeted in my seat. “Old boyfriend.”

“If you ask me, he’s a dumbass for letting you get away. You’re much prettier than candy.”

Another blush heated my cheeks as I shook my head and responded, if only to keep him talking, “Ahh, but you haven’t seen this particular piece of candy.”

“Don’t need to. He gave you up. In my book, that’s reason enough to achieve asshole status.” He winked and tipped his glass to mine. “But, thanks to his assholery, you’re here with me. So… to assholes.”

Okay. He was definitely flirting.

Really enjoyed this story!! The story line was a little different with a bit of insta-love and it worked really well for a great story!
Sophie is an aspiring actress that made the mistake of hooking up on camera with a rocker, Gavin, on a reality TV show. She thought it was love and didn’t regret her actions but then discovered the rocker was a cheating manwhore and she has to try to rebuild her career so she’s not looked at as just an easy lay. One night while drinking away her worries, she meets Hawk. He is a true Southern gentleman and when he offers to help her out with sticking it to the cheater, she takes him up on it.
Sophie is torn by her feelings for Hawk, especially when she finds out he is in a band as well. She’s been there, done that. But Hawk is nothing like Gavin and he brings on his powers of “woo” to show Sophie that not all guys are bad. Will Hawk convince Sophie to give another rocker a chance to win her heart?
Sophie and Hawk are such fantastic characters!! Sophie is sweet and sassy and even though she wants to make it as an actress, she isn’t willing to sleep her way to the top. Hawk is sweet and thoughtful but also so HOT and makes all the women swoon. The secondary characters are great as well and I can’t wait to read their stories also. This is my 1st read by this author and I am absolutely a fan of her writing! I will definitely check out other books by this author.

Rhonda is an Amazon bestselling romance author who strives to create a book boyfriend for all her readers. She’s married and lives in Michigan with her family. In her spare time you can find her talking to readers, getting lost in a new book, or just spending time with her family.