Title: Save the Date
Author: Carrie Aarons
Genre: Romantic Comedy
Release Date: June 24, 2018
Blurb
You know that pact you make with your childhood best friend of the opposite sex? The one where, if you’re both still single, lonely and hopeless at thirty, you’ll marry each other?

This is the story about what happens when you hit the big three-oh and have to make good on that pinky promise.

Personally, I think love, romance and all of that nonsense is a crock of, well, you know. And Reese Collins, the boy who used to put worms in my hair at backyard barbecues, knows that better than anyone.

But when he moves to the same city I’ve happily, and singly, inhabited for years, memories of oaths past resurface. Reese is like a dog with a bone; a really hot dog and that bone just happens to be me.

He won’t stop hounding me, and the crazy thing is, my frigid, traitorous heart is starting to cave. For my best friend.

It seems so far off, when you’re a kid playing Monopoly in your treehouse. But when that clock strikes midnight on your thirtieth birthday, and you’re standing alone in front of a grocery store-bought cupcake, a childhood deal to walk down the aisle doesn’t seem so silly.

Well, I must say Carrie Aarons has outdone herself. Save the Date is one of my all-time favorite friends to lovers romance. She had my interest when I read the synopsis, and she exceeded all my expectations.

This book is a friends to lovers romance, but Aarons put a bit of a spin on it. Reese and Erin have friends since they were children, and their friendship has lasted for decades. They even made a pact that if the other one wasn’t married by the time they were thirty, they would marry each other. Erin doesn’t think too much about it until Reese moves back to town, and he brings it up and keeps bringing it up. Now, it seems like she is thinking about it more and more and beginning to see her best friend in a whole new light.

If you think this is an instant romance, you would be wrong. Yes, Reese has been in love with Erin as long as he can remember. But, he has kept his feelings hidden from her until now. She doesn’t instantly realize she feels the same way. She has a lot of baggage to sort through in the relationship department, and she is afraid of failure. So, she has to take small steps, and Reese is right there beside her, patiently waiting and trying not to push too hard. I truly loved watching their love story unfold; it was sweet, sexy, and many times, really funny.

Reese was a male hero in a league of his own. He was the perfect combination of strong and sweet. He was gorgeous and sexy, but it was his heart that made him so irresistible. He was a NICU nurse which is a field not a great deal of men gravitate to, but it made sense for him knowing the kind of person he was. He was so patient with Erin, more patient than most men would be. He kept his love for her hidden for so many years, yet he was always there waiting for her, protecting her, taking care of her, always able to make her laugh, and always loving her.

In my opinion, Erin was a character who was somewhat hard to get to know. She always held back and kept people at a distance, only letting Reese in. She was fiercely independent, but her parents’ relationship helped make her that way. I did like seeing her change, when she began realizing she could still be independent and lean on Reese when she needed to and to take chances. She was always a spitfire, but with Reese by her side, she seemed lighter and freer to me.

I’m a HUGE fan of friends to lovers’ romances, and as I wrote earlier, this one has to be one of my very favorites. Aarons did a great job giving her readers the background of their friendship and what made it so special. It was only natural for it to become something even more special and lasting a lifetime. Save the Date is a heartwarming, sexy read that will leave you with butterflies and your heart a little lighter. 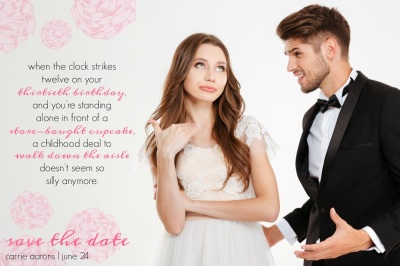 Author Bio
Author of romance novels such as Red Card and Privileged, Carrie Aarons writes sexy, swoony and sarcastic characters who won’t get out of her head until she puts them down on a page.

Carrie has wanted to be an author since the first time she opened a book, and still can’t fathom that she gets to live her dream each and every day.

When she isn’t in a writing coma, Carrie spends time Netflix-binging with her husband, snuggling her infant daughter, and chasing her black Lab through the dog parks of New Jersey.