“This is Beast. Beast is the size of a Volkswagen and has an impossible amount of buds and blooms. Beast also has thorns. But if you can sneak close enough to catch a whiff, and avoid the gnarly thorns, you’ll be ruined for all the other roses for the rest of your life. The sweetest, most addictive scent amongst the thorns.”
That’s what mom told my little sister and I once. She led us close enough to look but no further as she spoke of her favorite rosebush that she had affectionately named Beast.
That was a long time ago.
These days I know another Beast. A different kind of wild, untamed thing. He too is dangerous to get too close to. It’s unfortunate that I can’t afford to care, not when he’s the key to finding my sister.
They called him The Beast of Boston when he was a professional boxer. Now he rules over a bunch of criminals—the same criminals I hope will lead to my sister. I won’t stop until she’s found. I’ll get as close to Beast as it takes, gnarly thorns and all.
The problem is I’m so busy worrying for my own physical safety that I never considered how my heart would behave. Mom was right about one thing: I am ruined for all the roses for the rest of my life and it’s much too late to change it now.
***

OMG!!! LOVED this book! It is one of my top 10 reads of 2020. JL Mac completely pulled me into The Beast’s dark underworld. I was mesmerized!!!!

As you might imagine, there are elements of the fairytale, Beauty and the Beast, but this is nothing like the Disney movie. The beast in this version is much scarier. He is ruthless and intimidating. Beauty isn’t the shy little bookworm either. She is strong and can be pretty intimidating herself and has a taste for vengeance.

Ena’s sister, Lan, has gone missing. She has every intention of bringing her home no matter the personal cost to herself. That is how she finds herself lying to her mother and applying for a job as an exotic dancer at the club, Eden, which is run by The Beast of Boston. He is second in command to Orin McCrae, one of the most notorious crime bosses in the country. She is sure there is a connection.

Can I just say that Ena is my hero? This woman is incredible. At her first meeting with him, she is mentally shaking in her boots. However, she never gives anything away. She learned to do this the hard way. Her childhood was tragic until she became part of a wonderful family who showed her what love was, yet she couldn’t completely shed all that trauma she experienced. That comes in handy when dealing with Beast. She has prepared for every instance except the attraction she has for him. As time passes, she will have to face the battle between her mind and her heart because they are telling her two very different things.

Oh, Beast, who knew a monster could so sexy and appealing?

“How funny that this monster–this Beast of Boston–is also gargantuan and happens to sport one lifelike red rose of his one. He too has thorns, just not the type you can see. His are hidden, and they’re that much more dangerous for it. He’s a pretty monster. That’s not quite accurate though. He’s not pretty. He’s beautiful.”

He is such a complex and tormented human. Mac did such a magnificent job of peeling back his layers. She does this through the chapters that are told from his point of view. I saw the ruthlessness and the need to punish those that wronged him. However, I also saw glimpses of tenderness and loyalty. He had very few people he was really close to and trusted, but if you were lucky enough to have him in your corner, you had nothing to fear from him, except his overprotectiveness. That was kind of endearing!

The chemistry between these two both inside and outside of the bedroom was INTENSE!!!! Both were so stubborn and neither would give in easily. Two people were never better matched!!

The romance and suspense were blended together flawlessly. I’m not sure what kept me flying through the pages more…would these two finally give into their desire, or what other twist and secret did Mac have in store for me.

I cannot leave this review without expressing how much I LOVE Mac’s writing. Yes, this is a dark read, but her writing is beautiful, I would almost say magical. It really connected me on an emotional level.

“Ignoring her disappearance, not bringing up her existence? Are we both too cowardice to stir the sediment of the shipwreck, knowing the murk would blind both of us from finding our way back to the surface?”

In this passage, it clearly illustrates the devastating pain Ena and her mother feel about Lan’s disappearance. It was just beautiful!!!! I also loved Mac’s story of how she came up with the idea of this book. It began with a rosebush, and she turned it into such a beautiful and emotional read!!!! 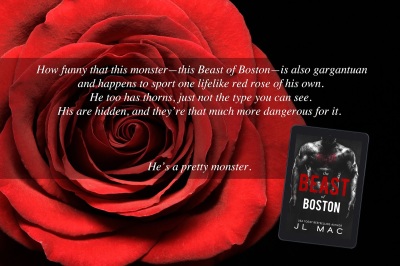 USA Today Best Selling Author, JL Mac, is the author of the bestselling Wrecked series, and several other romance titles. JL resides in El Paso, Texas, with her husband and four children. She is a native Texan having been born and raised in Galveston. JL admittedly has had a long and sordid love affair with the written word and has loved every minute of it. She drinks too many glasses of wine on occasion, and says way too many swear words to be considered “lady-like.” JL spends her free time reading, writing, playing with her children and living her happily ever after with her very own Prince Charming who she affectionately calls Tight Buns McHotness.
Other Titles by JL Mac Wreck Me (Wrecked #1), Restore Me (Wrecked #2), Accept Me (Wrecked #3), Reach Me (Wrecked #4), Seven Years of Bad Luck, Vital Sign, Social Neighbor (Social Series #1), Oculus (Oculus Trilogy #1, co-written with L.G. Pace III)